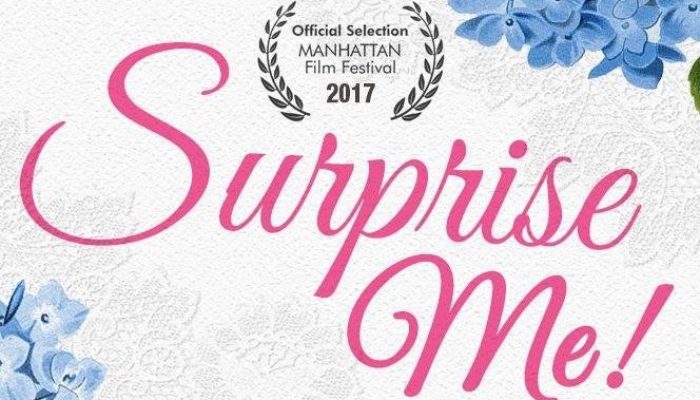 Apr. 21, 2017 /NEW YORK — Surprise Me!, a feature film that reveals what happens when food and feelings intersect, will be debuting at a premiere screening event at Cinema Village on April 27, from 5:00pm to 7:00pm. Directed and written by Nancy Goodman and starring Jonathan Bennett (Cake Wars, Mean Girls), Fiona Gubelmann (One Day at a Time, Daytime Divas), and Sean Faris (Pretty Little Liars, Vampire Diaries), the film was recently chosen as a selection by the Manhattan Film Festival.

Surprise Me! isn’t just a film about making it in the world and juggling a complicated love life, it’s a passion project to help anyone who struggles with emotional eating and bingeing it’s a crusade to end eating disorders. In the film industry, there hasn’t yet been a movie that addresses this important topic with relatable humor until now. Surprise Me! shows audiences what a craving can tell us about our feelings, comfort, choices, and love.

“Saying you want a better relationship with food is an error in our thinking,” said Nancy Goodman, director, writer, and producer of Surprise Me! “We need to have better relationships with people so that food is just food again.”

The premiere screening is hosted by Nancy Goodman with special appearances by cast members and a Q&A session about Surprise Me!

A trailer for the film is available on YouTube.

Surprise Me! takes audiences into the world of Genie Burns, the owner of Surprise Enterprises and the mastermind of off-the-wall surprise parties in unexpected places. While she takes crazy risks with her career, in her love life she plays it safe. But when she meets Jeff, she lets her defense down and is convinced he’s Mr. Right for now.

Meanwhile, Surprise Enterprises is hired to throw a surprise wedding, but everything seems to go wrong and intense emotions start to take their toll. This leads Genie to become reactive not herself and dives into cereal box after cereal box.

Through it all, Genie relies on her trusted business partner Steven, and Danny, a college friend. When Genie starts to think she has a “food curse”, she seeks professional help, ultimately learning to get through the pain, find her voice, and make decisions from truth, not what she wishes for.

By Kahala Grier
Kahala Grier is the owner and BDM of Top 5 Media Group, a boutique media agency thats located in Charlotte, NC. She specializes in helping to enhance the brands of small businesses from the inside out! She is a graduate of Clark Atlanta University, and a proud transplant of Brooklyn, NY. Kahala brings to the table a decade of sales, advertising, public relations and marketing experience. In her spare time she loves to read, travel and spend time with her family!

“Surprise Me!”, A Romantic Comedy Diet About America’s Obsession with Food, Premieres at Cinema Village in NYC
April 24, 2017

Felecia Baucom is featured in her first book, published by Linda Joy
March 16, 2017